The Secret Life of Martin Nodell...

This month marks the 72nd anniversary/birthday of the first appearance of Green Lantern in comics and as I'm going through and doing research for an upcoming episode of the Lanterncast, I found a series of youtube videos posted on August 18th, 2010. I thought it a fitting 'celebration' of sorts. This video series, taped in April of 1994 at the Dallas Fantasy Fair, is an interview with the creator of the Golden Age Green Lantern, Mr. Martin Nodell as interviewed by Lou Mougin. In the video he is also joined by his wife Carrie Nodell as he describes the history of the company that would eventually become DC Comics and the creation of Green Lantern, a character who, over the years, would evolve to become one of the most popular characters in the history of comic superheros. 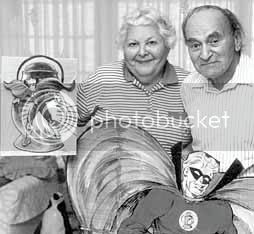 This interview is a fantastic find and a must watch for any fan of Green Lantern or comics history in general. Unfortunately Martin Nodell is no longer with us but, through this video, we can get a firsthand account of a historic time within the comics industry. It is an absolute shame that, at the time of this posting, these videos have few views, no 'likes' and no comments. In my love of this industry I feel led to post these videos to get the word out just that much more. I dip my head in respect to a great man with a great creative vision who did to much to contribute to my introduction and love of this industry. As a side note, the interaction between himself and Carrie is endearing and reminds me very much of my own grandparents. It's great to see a man I respect and admire as a creator to also be a man of relational and personal quality that is also worthy of the same, if not more, admiration.

So hat's off to you Mr and Mrs. Nodell for your part in comics history. I truly thank you both because I have no doubt that Mr. Nodell himself would attribute a fair amount of his own success to the woman by his side.