In 1994 DC Comics published Zero Hour, a five issue mini-series designed to not only serve as a major summer crossover but also fix some of the continuity problems that had plagued their universe after the end of Crisis on Infinite Earths.  Some have suggested that Zero Hour caused more problems than it fixed but at the time it was the dawn of an exciting new era for DC.  To kick off this new age DC followed Zero Hour with Zero Month.  As the name suggests all of the main DC books were rolled back to zero though each one had a different approach to the idea  Some books featured a new origin.  Some contained tweaks to the existing origin.  Some contained brand new versions of old characters.  All of them served as a jumping on point for new and old readers alike.

To celebrate this new era (or perhaps to bury it) some of us in the comic book blogging community have banded together from remote galaxies to discuss how the characters we cover were rebooted/revamped by looking at the solicitations of our character's zero issues as well as delving into the Wizard Magazine Zero Hour Special, which was a magazine published around the time of Zero Hour to promote the series, what was coming next and the history of DC in general.

As this is a blog crossover be sure to check out the links below to find out how other characters were treated during Zero Month.

MY COMMENTARY: Now, before I post MY assigned images that adhere to the nature of this crossover, I'd be remiss if I didn't include my own thoughts somewhere in here on the event we're covering. Because, despite the sheer caliber of those participating (and ZERO disrespect intended), my section, my characters LEGACY in this event has far more weight than any of the juggernauts listed above. To do merely the bare minimum in an effort to include myself would do a disservice to my self prescribed expertise on all things related to the Emerald Knight. (Although we DID cover Zero Hour WAYYYY back in Episode #94 of The LanternCast if you'd care to take a listen!) 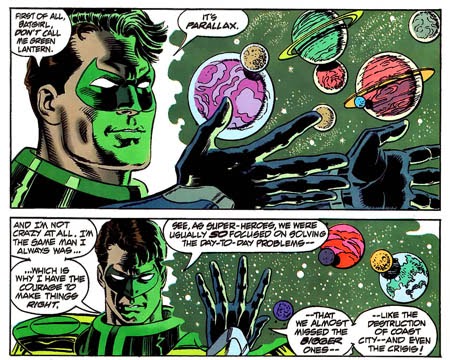 Racked with sorrow (and guilt) for being unable to protect the city he called home (Coast City) as it was obliterated by Cyborg Superman and Mongul following Superman's death, Hal Jordan, the GREATEST of the Green Lanterns, sped towards Oa, the planet from which his power had it's origin. Along the way, he slaughtered friends, students and foes alike, stealing their rings in a mad quest for more power. The power to FIX everything. To make it RIGHT again. To restore Coast City. Finally he enters the Central Power Battery and absorbs the entirety of its power and the power from all but one of the immortal Guardians themselves, becoming Parallax.

Students of the modern era of DC will know that, according to retcons by Geoff Johns, what TRULY happened was that an ancient entity living within the battery reached out across the Corps and found Hal beaten and distraught. A man with the capability, bravery and heroism of a Legend, deep in the moment of his greatest weakness and seized control. Manipulated by a being made of PURE FEAR, Hal Jordan betrayed all that he held dear of what remained to him and, upon entering the Battery (a true point of no return) Hal allowed himself to become the vessel for this entity...Parallax. But that's not today's point.

When Zero Hour hit, we knew only what we had read at the time. That a hero had been broken. A former hero, possessing the power of an entire ancient Corps, with one of the most indomitable wills in that Corps history...in search of a goal, to remake all of REALITY.

But, when last we saw Hal, he had stepped from the Central Power Battery. Remade and reborn into a dark reflection of his former self. Devoid of hope. Enveloped in his despair. And CONVINCED of his destiny to restore all to its former balance. But we didn't know what POWER he possessed. Oh sure, we knew the power of the Corps resided within ONE man. And a small sliver of that power siphoned to the ring of an individual bearer was classified as one of the most powerful tools in existence. But we couldn't fathom what it meant for ALL of this power to be at the behest of ONE man. Unfortunately for Hal, and those who called him friend and hero, Lord Acton was correct.

Zero Hour saw a threat realized. A background question answered. "What happened to Hal Jordan?" What had happened, the power he possessed, and the intentions for that power...had finally been revealed. A man with the powers of a God (with help from leftover energies from Crisis). Bending, twisting, warping and collapsing time itself in an effort to restart EVERYTHING that ever WAS. But whose aims had broadened because, as he himself put it, "Fixing one city doesn't help when the whole world...the whole universe...is messed up." A SINGLE man possessed the power to turn back the clock and restart reality. A power that had previously been harnessed by one (or two) others. The Monitor and Anti-Monitor from Crisis on Infinite Earths. Beings that had been around since the LITERAL dawn of time itself. The greatest Green Lantern became one of the DC Universe's GREATEST threats.

But he was defeated. Not by brute force or magical intervention (though the likes of Wave Rider, Superman and more including the Spectre himself played a role) but at the sharp end of a single arrow from the bow of a former friend. A man who couldn't let himself believe that his friend had done so much evil. That wasn't the person he knew. But faced with the reality, Oliver Queen unleashed an arrow straight for the center of Hal Jordan's chest. And the Big Bang began anew, unhindered by Hals interference. Time set in motion to proceed as it was intended (with a helpful nudge from the all powerful DC editors to enact a few alterations).

So why the bravado recap? Surely you knew all of this. Well, because Zero Hour was executed poorly in my opinion. It was a wonderful story, a remnant of a bygone age of DC for sensationalist storytelling. But it was compressed in a hurried format. Too few issues to tell too big of a story. But despite it's flaws, there needs to be an UNDERSTANDING as to what Zero Hour was.

Sure, Zero Hours ultimate goal was to fix the errors still left in the continuity of the DC Universe following Crisis. But Zero Hour was something MORE to a Green Lantern fan. You may have HATED that Hal was made a villain. Or you might have loved it (I mean, hey, he WAS getting stale prior to Emerald Twilight). But Zero Hour took the fall from grace of a beloved marquis character and made him a POWERFUL force in the DC Universe. A threat that took everyone from everywhen to face. Because Hal DESERVED that.

Oh I'm not romanticizing Zero Hour. Or maybe I am. But this is an important story nonetheless. And it needed to be told.

Hal Jordan: a hero worthy of being REMEMBERED turned into a villain, a force of NATURE to be FEARED.

You just don't get that kind of depth anymore do you?

NOW, onto the images you came to see! (CLICK TO ENLARGE!) 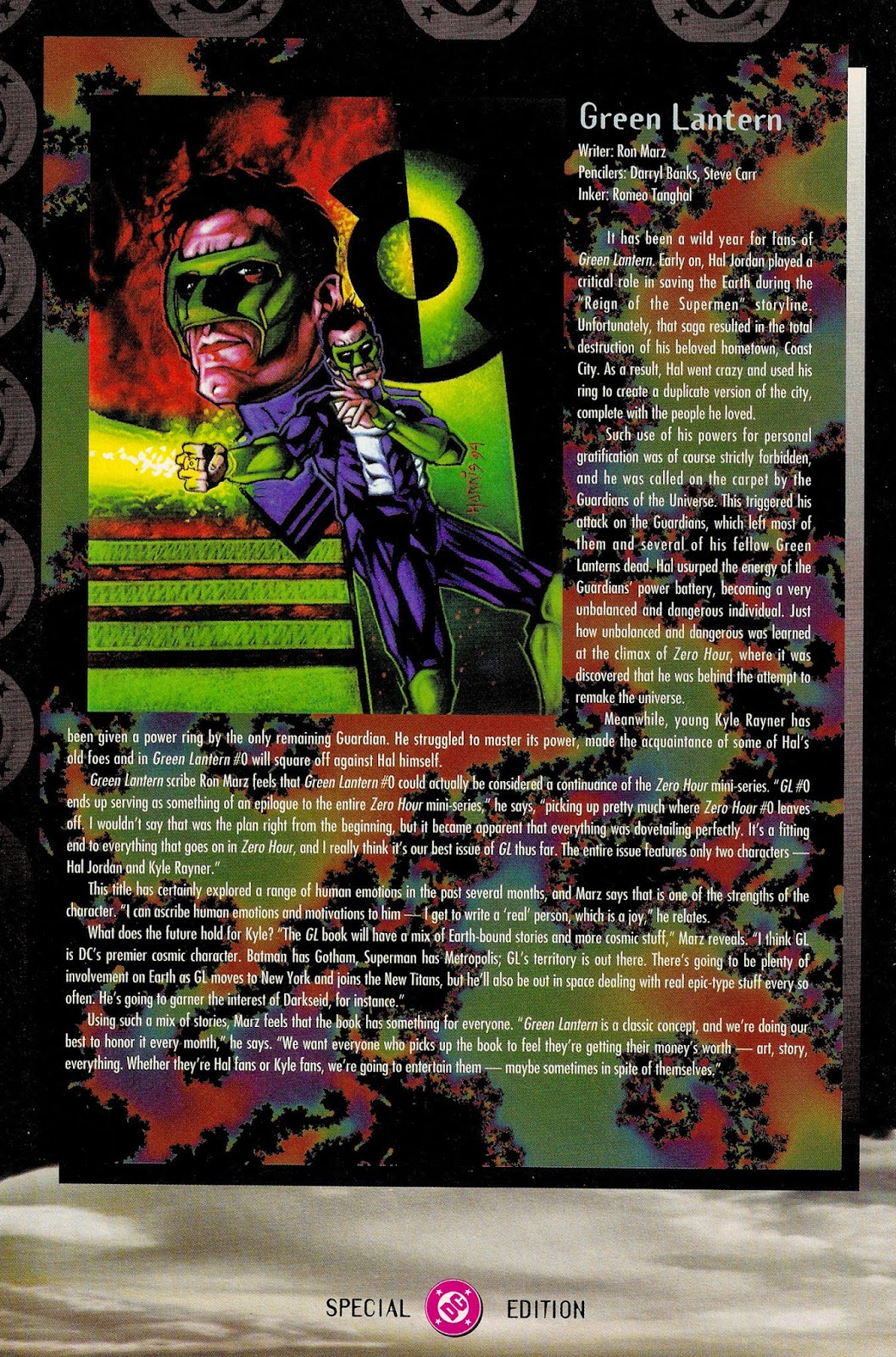 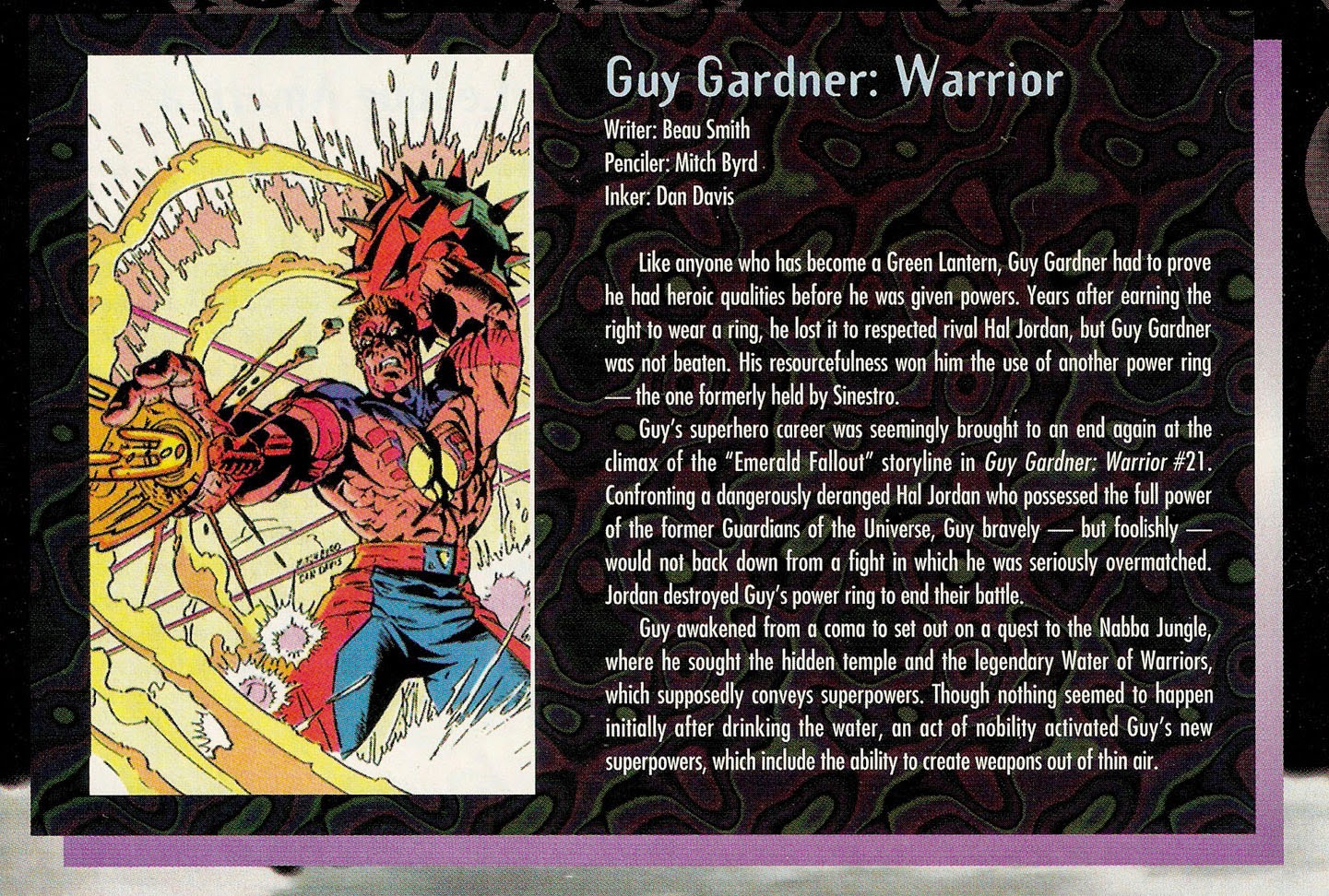 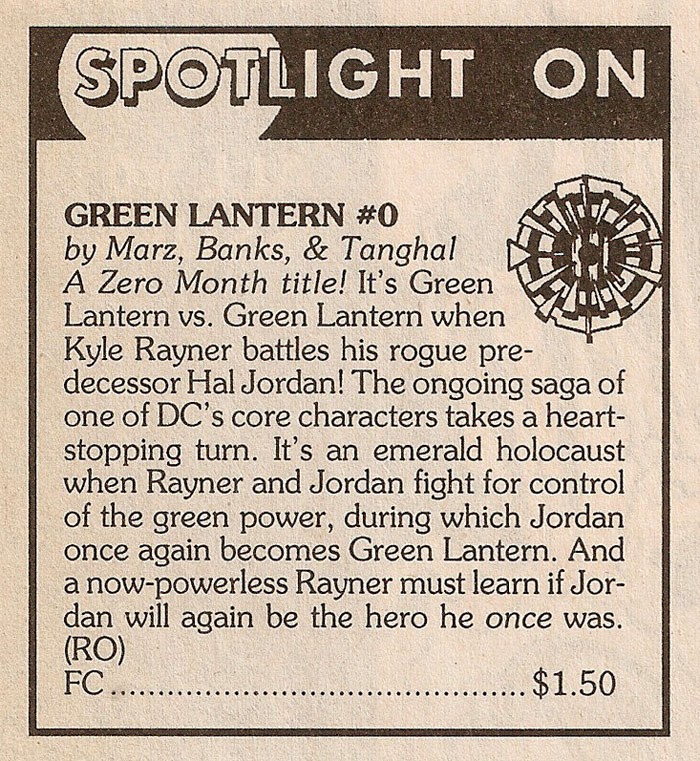 Posted by Chad Bokelman at 9:06 PM