The Dark Side of Blue...

In my previous post I mentioned that "each Corps will begin to face internal struggle and start to break in some form or another." I stand by that statement. However I don't believe all the Corps will begin to crack for the same reason. Where Atrocitus faces issues brought on by the speed with which his Corps was formed, I see the Blue Lanterns collapse beginning for a very different reason.
That reason is the nature of hope itself. During 'Blackest Night' we saw Sinestro momentarily control THE entity (the entity of life). Though brief, his connection to the raw power of life afforded us the very basic origins of each of the emotional entities. We learned how the hope entity came into being, "Hope from prayer" and were shown a panel of a furious rainstorm and flooding. Jim Ford holds the theory that this represents the worldwide flood, specifically the story of Noah found in the Old Testament. (a theory I agree with) It's safe to assume from this one point alone that the nature of 'hope' is very closely associated with religion. But to be safe I wanted to explore it a bit further.
If we look into the origin of the first Blue Lantern Saint Walker, we see a man struggling with his own faith as his world and his family die around him. We see him reach the mountaintop (both literally and figuratively) and bring that hope and that message back down to his people. Only then does the first blue ring find Walker and induct him into the Corps. Prayer played an important role in Saint Walkers life prior to being brought into the newly formed Blue Lantern Corps and continued to play a role well after the fact, as we saw post 'Blackest Night'... 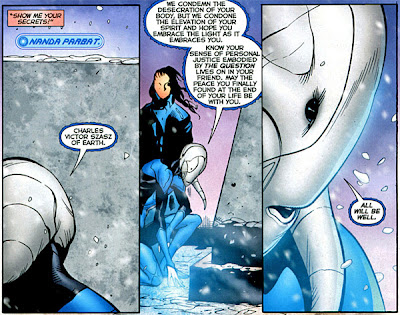 (from: "Green Lantern #56")
The religious aspects aren't all so obvious though. Prayer is easy to see and can be used in many different forms. I think the most compelling reason to compare the Hope corps to religion is found in their recruitment process.
During "Green Lantern #36", we witnessed the induction of Brother Warth into the Blue Lantern Corps. A process which Saint Walker said takes 'days'. According to the issue, each Blue Lantern selects the next candidate from the next successive sector (Sector One Blue Lantern selects Sector Two's Lantern candidate). That candidate is brought before Ganthet and Sayd and in essentially put through a compatibility-like interview. Ganthet and Sayd inform the candidate of the Corps intentions and put it to the candidate (now fully informed) to choose for themselves to join the Corps or not. Here's some dialogue from the issue itself from Ganthet and Sayd, "You have heard our intentions over the last three days, Warth. We offer everything we can to educate you on the necessity of the existence of the blue, and the sacrifice you make if you embrace our light."
Having been brought up in the Christan church (specifically Lutheran) that sounds alot like a religious statement of intention. Much like one does when you're officially inducted into membership of a church. I was going to make the comparison to baptism but these inductees already have a system of faith/hope of some kind, so Ganthet and Sayd act like pastors who educate potential members on their intentions.

With Ganthet becoming a member of the Green Lantern Corps and now back as a lobotomized member of the Guardians of the Universe, and Sayd under oath to be Larfleezes Guardian and slave...the Blue Lantern Corps is completely without their 'pastors'. It's more than just being directionless, they're now "lost".

It's subtle but multiple times since 'Blackest Night' Saint Walker has extended an invitation to Ganthet to return to the Blue Lantern homeworld of Odym. To have Walker beg frantically for Ganthets return would be out of character. But he has asked multiple times.
It's my theory that the Blue Lanterns will experience a fissure following a "crisis of faith" moment. Perhaps different factions will crop up, each with initial good intentions, and small sects will appear wielding the blue light. With no clear intention stated from a figurehead, no careful selection process to go through...it's very possible that the wrong person could be recruited and start an inner conflict within the Corps.
Posted by Chad Bokelman at 2:51 PM