The Sinestro Corps War...from within...

So for two of my past blogs I've been operating under the theory that what we will see come is the collapse of the various corps due to the nature of their respective emotion and/or the speed with which the various corps were set up. Nowhere else does this theory get more tricky than with the Sinestro Corps.

We saw the roots of the Sinestro Corps set-up when we first saw Arkillo and then saw a ring try and induct Batman into the Corps (at the time the yellow on the suits was purple). Then, we saw Sinestro ignite his ring under his own power (supposedly igniting it with his own fear). Thus the Sinestro Corps was born (at least its core members).

The back story I'm operating under is that Sinestro all along planned to create his Corps but began the leg work by recruiting core members. Afterwards recruitment began fast and heavy...

Here's where things get tricky. Now we're given no timestamp to prove otherwise but the above panel takes place RIGHT BEFORE this panel... 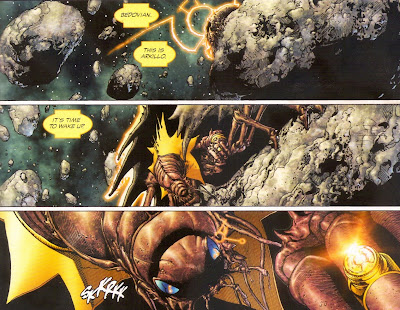 So unless Geoff Johns says otherwise, in my mind Sinestro picked a core group then went on a recruiting frenzy.
The PROBLEM comes not with the planning, the problem comes with RAPID recruiting AND the nature of fear. Setting up right hand "men" is all well and good, any strategist will tell you that, but when you select individuals from all over the universe who are known for "the ability to instill fear" and then IMMEDIATELY send them into war against Green Lanterns, then problems start.
Yeah, Thall Sinestro had his Hitler-esque moment with the Corps on Qward before they went to war but beyond that we're not given much of a "training" routine for Sinestros Corps. (aside from that Tales of the Corps story with Amon Sur) My point is, when you recruit thousands of sentient beings who, for all intents and purposes, are psychopaths and then send them to war against an enemy with the ONLY goal being, "Hey, just kill as many of them as possible however you want."...then later on you LEAVE that Corps (albeit not by your design)...can you blame them if they "give in to their sadistic urges"? 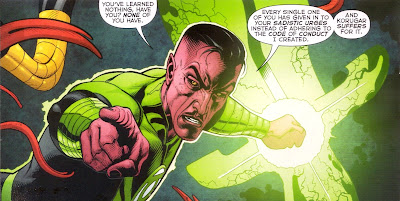 So that begs the question...to WHAT "code of conduct" is he referring? Did we miss something? Are we supposed to assume training took place? A "code of conduct" for a Corps centered around fear is alot for us to read between the lines. Obviously the question of Sinestro's "code" is the question Geoff Johns WANTS us to ask. Well we have two panels of hints but they're not much... 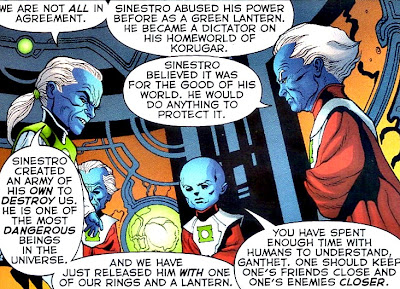 So that's all we get. Sinestro wants to PROTECT Korugar. But here's the kicker, this blog isn't about my theory. This blog is showing (in my opinion) that my theories are starting to bear some fruit. The Blue Lanterns will begin to see fallout, Atrocitus is starting to feel the unsettling rumblings within his Red Lantern Corps...but Sinestro is in the thick of his Corps issues right NOW.
He's seeing firsthand the fully negative effects (sadistic urges) that the yellow power amplifies. He's seeing the effect on his people (what better way for the writer to make a point?). The Sinestro Corps is on the precipice of major change at this very moment and it's my theory that it is ABSOLUTELY because of the NATURE of fear and the speed with which Sinestro initiated his vendetta against the Guardians of the Universe.
And, spoilers for the next blog...that's not all the yellow power of fear or, more importantly Sinestro himself, is about to contribute to the larger storyline. Wait till you see what the Blue Lanterns, the Sinestro Corps AND the villains currently in the Green Lantern Corps titl﻿e will be bringing to the table VERY soon...unfortunately you'll have to wait a few days. THIS one takes some setting up.
﻿
﻿
﻿
Posted by Chad Bokelman at 3:14 PM