Hey loyal readers! Well, I hope you are at least. Anyhow, I’m sorry for the delay. I told you from the inception of this blog that it wouldn’t be one with frequent posts, but hopefully the content I DO post is enough to keep you interested.

I recently got back from New York Comic Con 2012! Holy crap it was a whirlwind trip. If you’re a listener of ‘The Lanterncast!’ you know that I’ve wanted to go to New York City for many years (wanting to be a journalist will do that to you). So when the opportunity arose I had to take the leap. Unfortunately, the PR crew working for NYCC isn’t as awesome as the guys from Wizard World and I didn’t get approved for a Press Pass. I guess a strictly Green Lantern based podcast isn’t really worth their time. Never mind the fact that Geoff Johns, Dan DiDio, Joe Staton, Dario Brizuela, Ethan Van Sciver, Scott Kolins, Ivan Reis and many, many more were there. But I digress…

So I left on Thursday October 11th, 2012 for New York Comic Con. My American Airlines flight was cramped and, unfortunately, I didn’t think ahead enough to load up my iPod with movies, so I was rather bored during the non-stop flight to John F. Kennedy Airport. I got acquainted during the flight with a nice younger couple on their way to a wedding. The husband happened to be a geek himself and, as most people who figure out I’m a Green Lantern fan wonder, asked me what my thoughts on the Green Lantern movie were. After I hemmed and hawed in disappointment with him over the Emerald Crusaders first foray onto the silver screen, we de-boarded the plane and I began my trek to the baggage pickup. I won’t bore you with the details of getting my luggage and my epic journey to discover exactly how I was supposed to get from JFK Airport to Penn Station.

When I finally got off the train into Penn Station and walked up the steps onto the streets of New York City, I immediately ran into a sea of people. I expected that, what I didn’t expect was immediately becoming totally disenfranchised with the notion of such a large city. All I could think about was, “Holy crap my back is killing me! Where the hell is my hotel?!” So I found an NYPD officer and asked if he knew where it was. To my surprise, the officer merely pointed right across 7th avenue. There stood Hotel Pennsylvania, my home for Thursday and Friday night. So I walked through the doors, checked in and plopped down onto one of the rock solid beds in a vain attempt to alleviate the pain in my upper back. 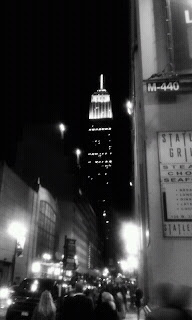 After about an hour or so, I collected myself and walked out onto the streets of New York City with one of my roommates, Mike, to begin a quest for a liquor store. It was when I left the hotel that first time that I finally started noticing things about the city. Madison Square Garden was RIGHT across the street, just above Penn Station (news to me). The Empire State Building was around the corner from my hotel and down a block. And, of course, there were people…EVERYWHERE. It takes some getting used to. In Austin, that amount of people in the streets usually means Austin City Limits or SXSW but in New York City, apparently that’s just normal.

We never did find a damn liquor store, but I did scarf down some McDonalds the second I got a chance (first thing I had eaten since my flight took off earlier that morning). We went back to the Hotel and spent some time bullshitting about comics and what to expect at the convention as we waited on our other roommate Matt to get back from the preview night at the convention. After he got back (and rubbed his swag in our faces) we went right back out and made a beeline for Times Square (apparently just up the street a few blocks).

As I was preparing for my trip, a co-worker of mine informed me that I should probably stay away from Times Square as it’s nothing more than a tourist trap. Well my friends that is utter nonsense. Times Square is awesome, especially when you grow up in a town that doesn’t have attractions like that. Really all I did was take a look around, but I stepped inside the Toys R Us for a few minutes to determine if my inner child still existed (he does, I’m happy to report). 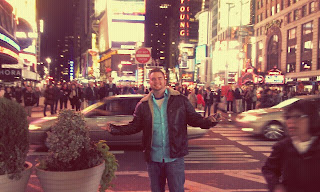 On our way back to the hotel from Times Square we FINALLY found a liquor store, I bought myself a small bottle of Jack Daniels and we stopped by a pizza place right next to our hotel. New York style pizza is delicious by the way.

On Friday I made my way to the convention with my two roommates and, after we stopped for breakfast, I stepped foot into New York Comic Con for the first time.

It’s huge guys. As in massive. No seriously. Look… 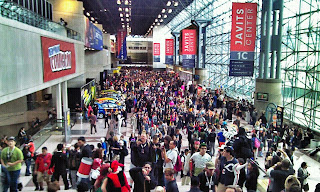 That’s just PART of the lobby.

But I made a beeline for the Comic Geek Speak booth to say hi to Adam Murdough and Bryan Deemer, swung by the Neal Adams booth to get his signature on my copy of ‘Green Lantern/Green Arrow’ #85 (he was charging $10 for one signature, RIDICULOUS) then met a long time listener of the Lanterncast, Edgar Rios. 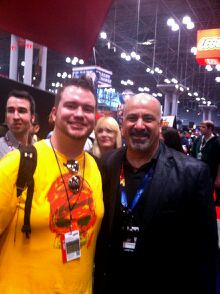 Edgar and I met up in the middle of the DC booth. After a minute or two, Edgar asked me if I wanted to meet Dan DiDio (publisher of DC Comics) so I said yes and got a picture with him and got him to sign my copy of ‘The Phantom Stranger #0’. I thought that was it but no. Dan and I ended up having a five minute conversation about Phantom Stranger out of nowhere. Not at a table, not in any official capacity, just talking randomly in the middle of the con floor about Phantom Stranger (one of my favorite DC characters).

Later on I met my co-host Dan Kurtzke in Artist Alley to connect with people and set up interviews for Sunday. I picked up my commission from Adam Withers of Shadow Lass from the Legion of Superheroes and got on the list for a commission from Scott Kolins.

Saturday I met my friend Amanda for breakfast down near the World Trade Center site and went with her and her friends to a bar near the Empire State Building called ‘Stouts’ to watch the Red River Rivalry game between the University of Texas and Oklahoma University. (we lost, badly) With plans to meet up with the group later on in Central Park, I left to check into my next hotel. And then everything went to hell. My bank charged me for a payment I told them to postpone so, for a few hours, I was without a place to stay in a place several hundred miles from my home. I was freaking out. BIG time. But everything worked itself out eventually and I finally checked in to my room and plopped down on the bed and watched TV, desperately trying to calm myself down. Because of my newly confused monetary state, I couldn’t meet my friends as I had planned but I was glad to hang with them as much as I did. 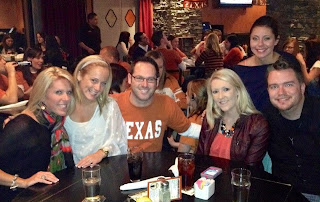 Later that night I went to a bar called ‘Stitch’ and met up with my friends Amber Love and Ashley. After drinks and craziness galore I finally got back to my hotel to go to sleep so I could be ready for the final day of New York Comic Con.

﻿
Sunday consisted mostly of walking around with my co-host Dan and conducting various interviews with creators and getting contact information for those we weren’t able to interview. The episode covering all of that content will be available on our podcast website and iTunes soon so keep your eyes on the feed. While I was there I picked up a print by Katie Cook and my commission of Solomon Grundy from Scott Kolins. I also made an appearance with Dan on the Fire and Water podcast!

After the Con, Dan and I made our way to New Jersey to his house where I spent the night before my flight back home the next morning. Thanks definitely go out to Dan and his family for putting me up that night and arranging my ride to the airport the next morning, especially Dan’s mother.

On the plane ride home I kicked back and watched ‘The Amazing Spider-Man’ for the duration of the flight.

All in all it was a great time. I didn’t get to see as much of the city as I wanted to, but at least I got to have fun and see my friends that I planned on seeing. And hey, now I have the lay of the land so my NEXT trip to NYC won’t be so hectic! Sorry for the length of the post, I just had a lot of people that wanted a detailed account of the trip, especially considering I’ve wanted to go to NYC for so long. I promise I’ll have a much shorter post of the Austin Comic Con recap…lol 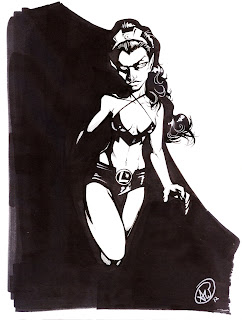 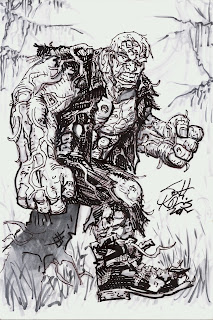