(CAUTION: THIS REVIEW CONTAINS POSSIBLE SPOILERS FOR ALL ISSUES OF 'EARTH 2' PUBLISHED AT THE TIME OF THIS POSTING. PLEASE PURCHASE YOUR COPY'S OF 'EARTH 2' FROM DC COMICS PRIOR TO READING THIS REVIEW.)


As many of you are no doubt aware, DC has decided to reinvent their oldest and most beloved characters in the new 'Earth 2' series. In the eyes of many fans these characters who once formed the Justice Society of America (JSA) have been a cornerstone for continuity errors in DC publishing history for years. Despite these woes, the teams that have written the JSA have managed to do what nearly every other comic title has; some write good issues, some don't. When DC announced the 'New 52' and began soliciting the titles for their new initiative to remake their Universe, many fans were unhappy to learn that no Earth 2 characters (the JSA most notably) appeared in their lineup. After their first round of cancellations, DC announced the titles taking the spots left open in their wake...two of which would focus on their alternate Universe mainstays, 'Earth 2' and 'Worlds Finest'. As 'Earth 2' makes it's attempts to reinvent the staple characters of DC's golden/atomic age, they've been the subject of controversy and no announcement caused more grumblings than the revelation that Alan Scott was now gay (click HERE for my blog entry on this announcement).

The controversy surrounding this new take on the golden age Green Lantern may still be ongoing but most of the storm has settled restlessly awaiting the release of 'Earth 2' issue three and the all new origin of Alan Scott as Green Lantern.
﻿
﻿

That issue is now out and let me say, I am pleasantly surprised at how good it is. In this issue we are immediately confronted with the chaotic wake left behind as a consequence of the cliffhanger from issue two. As Alan searches desperately for his love (Sam) we can see he is badly burned and otherwise injured. Suddenly a nearly twenty foot tall ball of green flame strikes up and begins speaking to him Moses-and-the-burning-bush style. After informing Alan that it is the power of the Earth itself it begins to heal him of his injuries sustained from the sky train crash. As Alan is being healed, the jade flame explains that, while it did not cause the crash, his "lover did not survive" and proceeds to tell Alan that a great evil is coming and Alan must be prepared as the new champion of Earth to confront this challenge.
﻿
﻿

The story then flashes (heh) to the Flash and Hawkgirl in Poland as they meet each other and test each others mettle (or rather Hawkgirl tests Jay's mettle). After their particular brand of super heroic introductions they are confronted immediately with a problem of planet sized proportions as every living thing around them (including plant life) begins to die. We cut back to Alan agreeing to take on the mantle of power offered to him and becomes "the Earth's one true knight...The Green Lantern". The birth of a hero isn't all bathed in positive emerald energy as it comes in immediate juxtaposition to the rise of a villain. As the wave of death sweeps across the planet, a grey voice begins to narrate it's intentions to destroy all life, all hope and destroy the new jade champion. Alans continuing conversation with the diminishing emerald blaze yields a conduit through which to channel his new found power in the form of the wedding band Alan was going to offer Sam, now altered by the green flame. The rise of power stands balanced though as, once we see Alans power fully bestowed upon him, we see the reveal of the primary nemesis, the man of grey, Grundy.

There are very few problems I have with this issue, the primary of which has nothing to do with Alan himself. Jay Garrick's Flash uniform. I understand that essentially it's a modern take on the garb worn by Mercury mixed with a super heroic flavor, but it looks god awful. The focus on the character however is good enough that it allows me to appreciate his development and distracts me briefly from the horrendous new costume...but only briefly. But before I wrap up my take on Jay, let me get this out. Jay Garrick reminds me of Kyle Rayner. A kid thrust unknowingly into a power greater than himself and just running with it day by day trying to live up to his new destiny. The similarities probably end there, but I thought it was worth mentioning before moving forward.

The only other problem I have with this issue is going to be HIGHLY nit picky. In fact, I only say it because I KNOW that there will be some select individuals out there livid over this one instance and the fact that I saw it right away has to mean SOMETHING. The fact that the emerald flame refers to Samuel as Alan's "lover" and not his "love" or "partner" or even "boyfriend". "Lover" sounds so impersonal and doesn't seem to hold the gravity and importance of the relationship as some other word would. Again, I'm unsure if this is even an issue and really it isn't with me, but I can see the potential fallout here, however minor it may be.

The revelation of Grundy however was fantastic. As I was in the comic store picking up the issue, an individual in the shop informed me that I would never see the villain coming. Unfortunately for him, the second he said that I suspected it would be Grundy. Not because of my amazing intellect or any such reason but simply as a result of my knowledge of the history of the character I was already thinking, "Wouldn't it be awesome if it was Grundy?" However, once the grey box narration came across the page, I just knew. My excitement was steadily building as with each page turn I was thinking more and more, "Is it? Is It?! IS IT?! YESSSS!!!!!" To see Grundy on the page was fantastic and obviously (at least in my mind) sets up the 'Blackest Night' equivalent for the Earth 2 universe as an analog for life goes up against an avatar of death but I may be reaching.

Overall the issue was a fantastic achievement and I cannot wait to see the progression of this character as he assumes a role he was meant for all along...on equal footing with Superman in both power and character. So bid a truly loving and heartfelt adieu to the classic Golden Age Alan Scott Green Lantern and brace yourself for the newest interpretation of the character as he blazes onto the scene in a truly wonderful fashion. 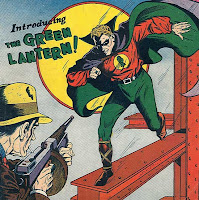 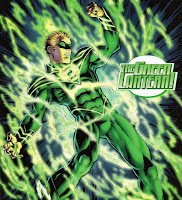 Posted by Chad Bokelman at 8:00 AM