Last night I was treated to an advance screening of 'The Amazing Spider-Man'. Granted the 7:30 pm showing I went to was only a scant few hours ahead of the midnight release to the public, but seeing it ahead of others (if even just a few hours) was quite thrilling. Going into this movie I had no great expectations for anything other than the graphics. My history with the Spider-Man side of Marvel Universe is really quite sparse and as such I don't have much of the back story with Peter Parker's parents committed to memory. Nor do I know much about Curt Connors (the Lizard) or Peters love interest, Gwen Stacy. However I will say that in relation to the Spider-Man film interpretations we've seen thus far, this movie was far superior to the others.

Before I go much further, I suppose I should lay bare my bias'. I couldn't stand Tobey Maguire as Peter Parker. In all honesty, I can't find Tobey Maguire appealing in much of anything. Not to mention I also thought Kirsten Dunst was a consistent bore. But, at the time, I identified with the outcast character Peter Parker and was rooting for him to get the girl and be the hero. Those movies definitely delivered just what I wanted at that time. Of the three, I'm of the group that believes the second movie was the best but some things were missing from the first three altogether that I just couldn't rectify in my viewing of them. Such as the appearance of Mary Jane right out of the gate as Parker's love interest, or the absence of a more traditionally smart-alec Spider-Man and the introduction of web shooters incorporated into his physiology. Much to my great joy however, this new interpretation did not repeat the mistakes made by the previous three.

The movie opened with a sequence of the young Peter Parker and his parents. As things escalate in the scene we see them leave Peter with his Aunt May and Uncle Ben. Now, although I said there were spoilers in this review, I don't necessarily want to throw out a play by play and ruin the entire experience for you. I bring this up because, right at the beginning, this movie introduces a plot point and story angle the first three neglected to play with: Peter's parents. Their history within the comics is muddled and a bit unclear from time to time (being CIA agents recruited by Nick Fury at some point, or so I'm told) but supplying that there IS a riddle to the history of Peters parents was something the original movies never once mentioned.

As you get deeper into the movie you're introduced to the rest of the cast, who I felt all played their respective roles very well. Gwen Stacy in particular was a character that was immediately endeared to me when she was introduced. She was likable, smart and stunning (but not 'sexy'). Her relationship with Peter evolved very naturally (for High Schoolers) and became an interesting dynamic within the film. Speaking of High School, that brings up another small but interesting aspect of this film: Flash Thompson. Flash had traditionally been the complete asshole jock constantly picking on Peter. A completely unlikeable and irredeemable character. Not so in this movie. Once uncle Ben dies, Flash lays off and becomes a relatable character capable of compassion and appreciating the gravity of a moment, an addition I felt added a sense of realism to the movie.

The 'villain' of the movie, Curt Connors/The Lizard was another high point. His descent into madness was a little rushed and implausible to me in a way considering the layout of his character in the beginning, but they provided enough of a mystery to the history of this character prior to meeting Peter that you're not QUITE sure where he stands for the whole movie. So maybe his rapid descent into near utter madness was expected and maybe, with possible later film revelations regarding Peters parents and Curt Connors, it's even expected. When he transforms into the Lizard though is when I became pleasantly surprised about one minute aspect of the character, his voice. The director saw fit to have the same actor use the voice of his CGI monster counterpart albeit filtered through various tonal dilutions to make his voice sound just different enough. This added to the movie and I'm not quite sure how. Perhaps I was just happy that they made the Lizard a talking villain and not merely a mindless and mute rampaging monster.

Something else this movie had that the first three movies didn't was very simple: heart. This was a far more emotional movie. I BELIEVED Peter was racked with guilt over the death of Uncle Ben. I BELIEVED that Peter cared deeply for Gwen Stacy. I BELIEVED that Peter was struggling internally with being "abandoned" by his parents. All of the characters had a very real emotional presence. It was very palpable. You felt for every character in this movie in a way that you didn't really get with the more action driven sequences behind the first three Spider-Man films. I believe it's a credit to both the acting and the directing. 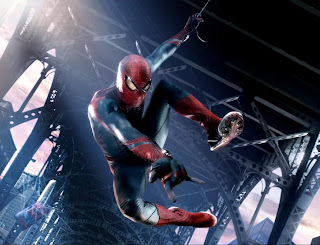 The last thing I'll say about this movie that I LOVED is perhaps the biggest. Spider-Man himself. Andrew Garfield's portrayal of Peter was fantastic but it was his scenes as Spider-Man that impressed me the most. He was cocky, brash and most importantly an insufferable smart ass. Dropping one liners and snide goofy remarks with nearly every move, Garfield really brought to life one of the biggest things I felt was missing from the first movies, a sense of fun without it being cheesy and comic booky. It was a thrill to see. In addition to his personality, the way in which he used his powers themselves was much better. There were far more flips, spins and jumps than any of the previous films. The way he swung on his webbing was more free form, spinning from time to time or flipping through the air. He actually MOVED like a spider! He was much more acrobatic in this movie, which was something that really added to the entirety of the films appearance.

Overall the movie was an enjoyable and fun experience that catered to the comics in a much more comprehensive way. It unseated Spider-Man 2 in my mind and makes me forever grateful I'll never have to see another Tobey Maguire Spider-Man movie again.

P.S Stay after the credits. It's not an AMAZING scene but it is something worth seeing...even if you have no IDEA what's going on in it...