This one has been a long time in the making. I've been a fan of Green Lantern for a good long while. Only recently, however, have I really dug into the history of the comic book industry. But I'm lucky to say that my very first encounter with historic comic books is the "Green Lantern/Green Arrow" series from the 1970's by Denny O'Neil and Neal Adams. When I first read those books, I thought they were well drawn for the time frame in which they came out and they seemed a little too 'preachy' for my tastes. Overall I thought it was better than I expected. But then I actually dug into the history of the industry by watching documentary's and comic con panels, listening to podcasts & reading books. 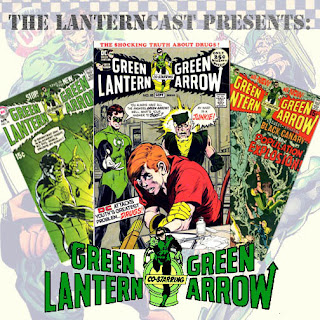 It was only then that I understood just how ungodly important the "Green Lantern/Green Arrow" series actually is. In a comics code authority era, in a time when people weren't really looking to DC comics for their reality based stories, Denny O'Neil and Neal Adams changed the game forever.

Join myself and host of 'The Film Jury' (and former Comic Geek Speak host) Mike Gallagher for a history lesson on the comic book industry leading up and into the creation of the Comics Code Authority. Download and listen and maybe you too will understand just how important this series really was.

Look for 'The LanternCast!' in iTunes! While there, be sure to leave a review for the show in the main show feed!

Feel free to email any questions, comments, compliments and criticisms to: chad@lanterncast.com (or post them here!)